As with all adventures, you need or should be prepared for everything. Many things get overlooked or forgotten. They're usually seemingly little things that are negligible or trivial in nature, that is until you need them the most. Two of the most common are toilet paper and first aid kits. For now though, we'll discuss first-aid kits.

I looked through the whole gamut of first-aid kits, from the expedition kits for 5 or more people, to little kits that one would normally find at a dollar store. I was never quite satisfied with what I found, so I opted to create my own. I should probably start off with saying that when it comes to going on a full on expedition with a few other people and staying for a few days or longer, one of the expedition kits provided by Adventure Medical Kits would actually serve quite well. The majority of my trips are overnighters or days trips, so I didn't really need quite that many supplies. The problem is that in some of the smaller kits made for overnighters or day trips, they just have the bare bones bandaids and alcohol wipes.

Given all of that, when creating my own I started with a small kit. I used a small premade kit mostly for the handy little zipper case, then crammed some more stuff in there. I started with a little Coghlan's Trek I that you can buy from Walmart or any outdoors store. It only had the typical little bandaids, medical tape, and alcohol wipes. Hopefully that's all you will ever need, but we don't usually plan our accidents around hopes. If we did, we would obviously never have them in the first place. The good thing about the little Trek I pouch is that it had plenty of room for more supplies. I opted to pack it with a few other supplies just in case.
1. Mirror for signaling and self-checking any facial wounds
2. 2 Gauze pads for more serious abrasions and cuts
3. 2 Knuckle bandaids, I will probably double that to 4 since knuckle abrasions and cuts are the most common for me.
4. 2 Fingertip bandaids, I will also probably double these to 4 since fingertip cuts are also common.
5. An assortment of several medium and small bandaids, as well as several of the little wound closure strips (the technical name escapes me for some reason)
6. A moleskin for blisters, which has saved my toes more than once!
7. Athletic or medical tape, for helping secure bandaids or gauze pads.
8. An assortment of peroxide and alcohol wipes
9. A couple packets of sting relief, not really needed, but very welcome. 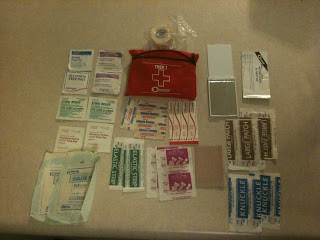 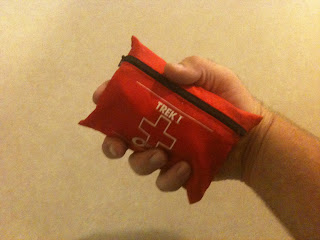 I also carry a small bottle of basic pain relievers and allergy meds separately, but make sure you or the people in your group aren't allergic to any of these meds. All of this stuff packs into my little first aid pouch quite well and it's still small enough to hold in the palm of my hand. I simply stick it in one of my drybags or usually in a spare pocket in my tackle bag. I've only had to use mine a couple times, but I've always had what I needed to at least take care of small injuries until I can get out of the backcountry. In the event of bigger injuries, I can usually improvise with objects around me to create what I need to stabilize an injury then control the bleeding (if there is any) with the assortment of bandages in my little kit. These skills were learned in a certified wilderness first-aid course, which I very highly recommend!

That's basically it for my little kit that I carry 90% of the time. If you're looking to put your own together or purchase one straight off the shelf, do your research and read up on the various products reviews out there, then get out there and take a first aid course. Hopefully you'll never need to use what you've learned, but you never know what will happen. Be safe and go prepared!
Posted by thelosthiker at 1:57 PM

thelosthiker
This is my own little bit of webspace dedicated to the outdoors and my experiences as a commercial raft guide, as well as my thoughts on various issues that aren't remotely related to the outdoors at all. I also post reviews for much of the gear I use or have used that have stood out to me as either extraordinary products I'd recommend or crappy products I choose to avoid. I guess you could call it a general purpose blog. Nonetheless, the conversations can get interesting. Those who want to learn more about me, need look no further than the contents of this blog. Big thanks go out to the local outfitters like Sheltowee Trace Outfitters, Mike's Hike and Bike, and J&H Outdoors. Enjoy!