Last year I started looking into upgrading a large majority of my fishing gear.  Most of it was old hand me downs from my Dad or cheap stuff that I had bought as a teenager.  One of the first purchases I made was a Bass Pro Shops Pro Qualifier.  It was definitely not an impulse purchase devoid of any research.  On it's surface, it looked like an excellent buy with literally all of the features I was looking for, with plenty of reviews to prove its worthiness.  I looked through hundreds of reviews and comparisons, and made what was in my mind, a fairly educated decision to purchase one with confidence.  There were a few nagging thoughts in my mind, mostly from some of the negative reviews.  At the time though, they didn't bother me enough to keep me from purchasing one, especially at the $80-100 pricepoint it's usually offered.  Over the months since though, I've been apprehensive about the durability of these little reels.  Would they stand up to years of use, hundreds of fish, and how hard would they be to obtain service or parts?  What I've found lately along with what I've discovered on my own is that I really don't think I have anything to worry about, although I still wasn't able to find pictures of the guts and components that make this reel operate as it should.  As a result, below is a compilation of my findings through research and a brief "field strip" of my own Pro Qualifier.


To begin with, my primary concern was with service and parts.  Would they be easy to get serviced if I couldn't do it on my own, and would parts be accessible and reasonably priced?  After making a few calls to the Sevierville, TN Bass Pro Shop as well as reading through this VERY detailed 5 year review of the Pro Qualifier, the answer is YES.  Parts are very readily available, and while you may have to buy a whole sideplate assembly to replace one bearing or piece of the braking system, that assembly is VERY cheap (<$20).  That's just a small example, your experience can and will vary depending on what part(s) you need.  BPS has you covered either way, and given the pure amount of Pro Qualifiers sold and the size of its parent company, the parts will be around for a long time.


It should be noted that I am by no means tooting on Bass Pro's horn.  I have no affiliation with them, and I was a bit skeptical about the 675 reviews that have been posted on the Pro Qualifier.  What has actually been kind of bugging me is that many of the reviews are several years old.  The Pro Qualifier has surely been updated at least a little bit over the years.  I'm hoping someone who reads this will be able to confirm if and when the PQ has last been updated, just to make sure the last update coincides with the oldest review and that the reviews haven't been simply combined over several iterations of the PQ.  You won't see this on some of the other reels posted on their site, which might have something to do with manufacturers changing the model numbers on new iterations of their products.  Either way, it's my opinion that the reviews seem to be relatively fair across the board for the Pro Qualifier, albeit a bit excessive.  Also, the PQ is a VERY popular reel in the BPS stores and online, so the reviews may pretty much evenly coincide with the pure volume of sales.


Back to the durability of the Pro Qualifier, there are a few people out there that have knocked it's durability, but there are also more than a few people out there that handle their gear like a gorilla.  That leads me to leave those opinions out of my overall decision on deciding whether the PQ is worth my money and time.  There are also a few people out there that absolutely love their PQ's, they own a dozen of them and they all work perfectly.  I would think that even with the best reels out there, it's expected to have at least one or two issues from time to time.  That's just called being realistic.  Even the best products fail, so I will never think of anything as perfect and infallible.  As a result, I throw out the reviews that I think tend to embellish a bit too much.  What does this all come down to?  A fine middle ground that tells me pretty much what I would expect, a reel that comes as close to perfect at the $80-100 pricepoint as I'm going to get.


This leads me to the final part of my in depth look at the Pro Qualifier, what exactly is inside these little guys?  Many people complain about a reel having plastic gears and question their durability.  I will go ahead and confirm everyone's suspicions about plastic gears, they are NOT durable....but they aren't meant to be, especially in this particular application.  As you will notice in the pictures below, the PQ does have plastic gears, but they are there to drive the worm gear that moves the line leveler back and forth.  The main drive gears are brass and I expect them to last many years.  It's my belief that BPS went with plastic gears in order to protect the line leveler system from excessive damage in the event the reel is dropped and the line lever takes a direct hit.  It has happened to me in the past with a different reel, and it has ruined the worm gear and line leveler assembly to the point that I just had to scrap an entire reel.  It's my hope (and I would suspect BPS's) that since there are plastic gears driving the line level system, those will strip or fail before any major damage is done to the actual worm gear or other part of the line leveling system.  It's a lot cheaper and easier to replace a couple plastic gears versus scrapping an entire reel because of a borked line leveler or similar.  As mentioned above, it's very easy to get those gears serviced or replaced in the event they are needed. 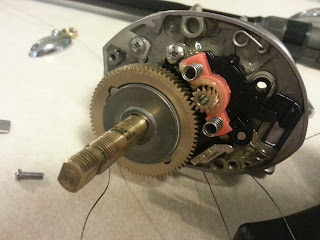 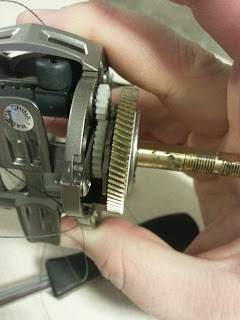 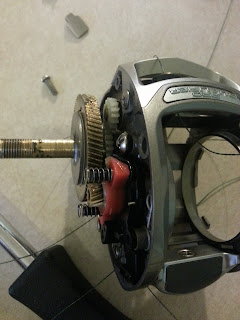 Beyond the scope of durability and the other stuff I've already discussed, the Pro Qualifier seems to be made very well and is packed with premium features.  From the one piece aluminum frame and aluminum drag star to the super handy dual braking system, the PQ is a very well rounded reel for the money.  As mentioned earlier as well, I put it in the $80-100 pricepoint.  While the $20 range looks odd at first, the reason it's there is because the PQ often goes on sale for $80, although it's normally priced at $100.  Bottom line, it's an excellent deal for $100....for $80, it's even better!

Posted by thelosthiker at 7:13 PM 6 comments:

thelosthiker
This is my own little bit of webspace dedicated to the outdoors and my experiences as a commercial raft guide, as well as my thoughts on various issues that aren't remotely related to the outdoors at all. I also post reviews for much of the gear I use or have used that have stood out to me as either extraordinary products I'd recommend or crappy products I choose to avoid. I guess you could call it a general purpose blog. Nonetheless, the conversations can get interesting. Those who want to learn more about me, need look no further than the contents of this blog. Big thanks go out to the local outfitters like Sheltowee Trace Outfitters, Mike's Hike and Bike, and J&H Outdoors. Enjoy!